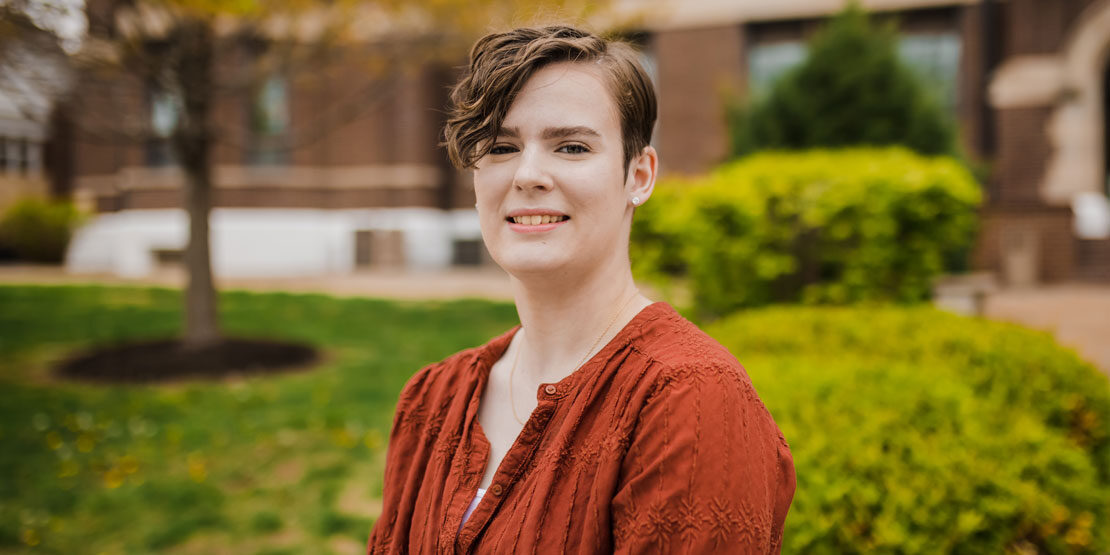 Abigail Bennett, a senior at William Woods University (WWU) and native of Jefferson City, was recently honored with two prestigious awards for service and leadership from the University as part of its year-end Co-Curricular Awards. At the end of each academic year, WWU recognizes a select group of graduating seniors who have achieved excellence in academic, co-curricular and service projects during their time at the University.

Bennett, who graduated this spring with a Bachelor of Science degree in English Education, received the Academic Service-Learning and McNutt awards from the University. While at WWU, Bennett has been involved in a variety of service and leadership projects while earning distinguished academic honors.

The Academic Service-Learning Award is presented to the graduate with a minimum grade point average of 3.40 who, in the estimation of the faculty of the University, has best exemplified an exceptional commitment to service-learning.

The McNutt Award is presented to the graduating senior whose consistency of purpose and selfless devotion to service were contributed without consideration of the award and who best exemplifies the spirit and qualities of Amy Shelton McNutt, an alumna of William Woods University in whose honor the award was named.

Bennett’s university experience has included service in highly responsible leadership positions such as head community advisor, responsible for ensuring the safety and wellbeing of over 50 students living in campus residence halls. Abigail also served as an Orientation Leader, assisting in acclimating new students to campus, and also undertook the responsibility of being the Chair of the Peer Educator group at The Woods, a group dedicated to student-led engagement on challenging issues, creating dialogue among peers that positively impacts attitudes and behavior.

Bennett’s leadership also extended to academic performance, including being a member of the William Woods Honors Program from 2018-present, and serving as a member of the Campus Standards Board and Dean’s Council from 2019-present. Abigail also served as Student Alumni Council Class President for three years; as a member of Kappa Delta Pi, serving as Historian from 2019-2020 and President from 2020-present; as Publicity Co-Chair and Treasurer in the Jester Theatre Company, and as a William Woods University Mainstage Theatre member, assuming the role of Stage Manager for the production of The Bard of Avon.

William Woods University6 days ago
What a great night in St. Louis! Thank you to all our alumni who joined President Moreland and the WWU Advancement Team at Brio for our Alumni and Friends Gathering, the first of our Summer Tour! It was great to reconnect, and we cannot wait to see you again soon!!
#MorelandSummerTour