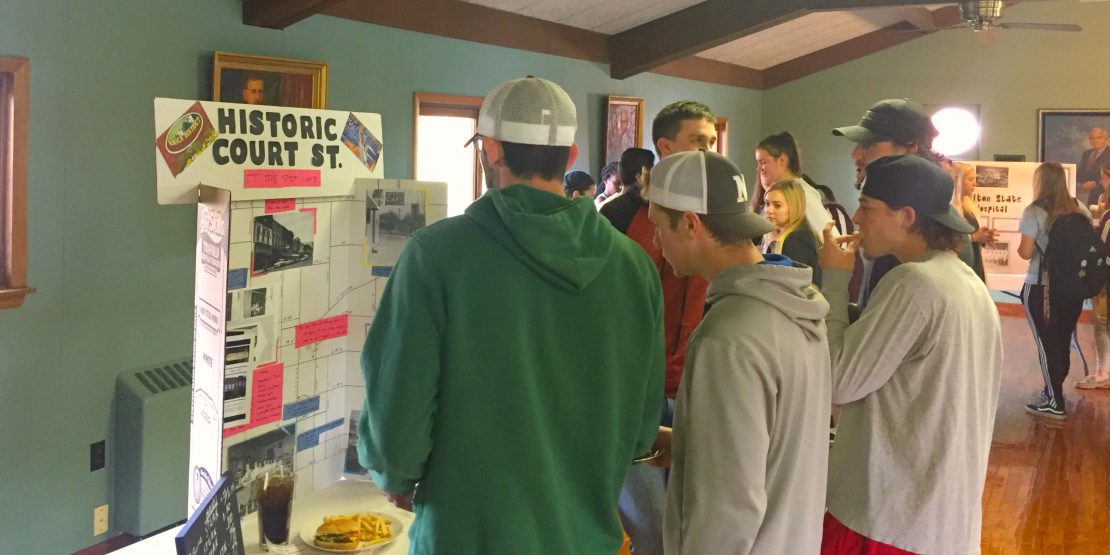 Stepping into the Kingdom County Historical Society is like entering a time machine. Opening the door sends you careening into the past, not knowing what you might find. Rows of binders, containing the sum total of the area’s history, are placed neatly on shelves. Letters, pictures, knives, medals, and clothes lay protected in their display cases behind clean glass. A not-to-scale model of a Civil War battle is tucked into the wall in the back. All of these things could be called treasures. But the real treasures of the Historical Society are its employees.

But why did three William Woods University students step foot in this plain-looking Court Street abode in the first place? 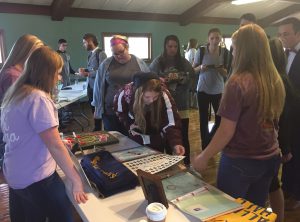 We are currently taking a history class called Social Movements in the 1960s with Professor Craig Bruce Smith. The students in the class were charged with creating group presentations about different aspects of either William Woods or Fulton in the 1960s, an era marked by extreme social change. To do this, we were required to research our topic (beyond Wikipedia). Forging into the unknown, we would need to ask the people who had been there, lived in the 1960s, and hopefully taken a few pictures along the way. We would then host an event, showing off our presentations to the community. In doing so, we would examine how the 1960s touched everything and everyone in America — even in a small town like Fulton.

After a little prodding from our professor, we settled on exploring the history of Court Street, known today as the Brick District. The “main street” of Fulton, it contains as much small town charm as you can pack into a city block. It has played stage to presidents, prime ministers, economic highs, and lows. Without the chain restaurants and discount stores like Walmart that dominate Fulton today, we suspected that people in the 60s must have flocked to Court Street for their every need. So, we wanted to know, where did everyone hang out on Court Street during this decade?

At first, my group had been interested in Sault’s Drug Store, a pharmacy opened in Fulton in 1937. Today it contains a gift shop and soda fountain, which to us seemed the perfect place for some hip 60s kids to kick back with a root beer float. After a quick journey inside, and the scanning of an informational pamphlet, we knew that Sault’s was not the place we were looking for. Not only had it not always been on Court Street, but the soda fountain was not added until the 1980s! But just down the block was a place that could give us the answers we were looking for: The Kingdom County Historical Society.

All we had to do was ask. Immediately, three 5″ binders full of the entire history of business on Court Street were placed in front of us. Cafés, bookstores, drugstores, clothing stores, banks, pharmacies, laundromats…the sheer number of shops that had at some point called the Brick District home was staggering. It would take days to pour through every single one. So, we asked for help. To our not-so-surprise, the employee knew exactly what we were looking for, and directed our attention to the “café” section of one of the binders. Inside, tucked away between pictures of Beks and the Cozy Corner, was a long-gone restaurant called The Spot Café.

Learning about The Spot Café 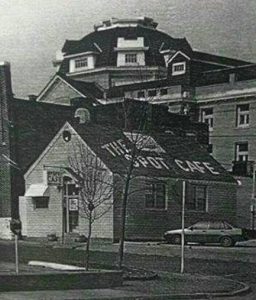 The Spot Café was “The Spot” in 1960s Fulton. Located just off Court Street on Market and 6th, it was perfectly located for a hungry college student or a parched Brick District employee. It had the perfect diner look, with a long lunch counter, round seat stools, checkered tile floor, a chalkboard menu, and a jukebox in the back. The pictures of The Spot were filled with smiling waitresses, dressed in all white. We all agreed it was perfect. Excited, and armed with copies of some of the more choice photographs, we ventured down 6th Street to find The Spot. But it was long gone, torn down and paved over. Now, a lonely ATM stood in its place. Our paradise had been paved, with only a parking lot to remember it by.

Recreating the past was now the duty of the present.

To resurrect The Spot for our exhibit, my partners and I decided to go all out (only fitting for a restaurant that meant 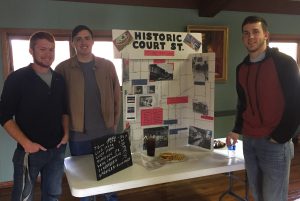 so much to the Fultonites of the 60s). Using a trifold poster board, my partner’s hand drew a street map of central Fulton, with Court Street down the center. They then used the historical photos we had copied to show what the Brick District looked like all those years ago. More importantly, however, and dominating more than half the display, were the pictures of The Spot. All those waitresses’ smiles would brighten up someone’s day again. For my part of the project, I decided to try and recreate The Spot experience. Using a white plate and classic drinking glass, I laid out a 60s menu, hamburger, fries, and a Coke. The perfect meal for a hungry student at The Spot. I also drew out the Spot’s iconic chalkboard menu, being sure to include the now insanely cheap 60s prices. Our presentation was ready.

My partners and I did not have high hopes for attendance at the event. (Most LEAD points at 9:30am on a Thursday are not exactly “successful.”) But a success is exactly what it was. We had completely misjudged how many WWU

students were interested in the subject, with every person walking in adding to the ever-growing mass of people. Sharing with them the history of The Spot, and the Brick District as a whole was extremely rewarding. They were impressed not only with our subject matter, but also our presentation as a whole. The mood was electric, every exhibit energizing the room with historical energy. There were five other groups presenting on a wide variety of 1960s-era topics: sorority life, the Fulton State Hospital, fashion, the university’s code of conduct, and student life. Even students who were not interested in these topics found something that piqued their curiosity.

Many students were drawn to the 1960s William Woods yearbooks placed in the middle of the room, flipping through pages and pages of pictures of their university’s history.

What stuck with them the most was no matter how far back in time they flipped, The Woods was always the same.

For me, this was one of the most amazing projects I have ever had the pleasure to take part in. To any students of William Woods who are reading this, take Social Movements of the 1960s with Dr. Smith. Trust me, it’s worth it.

Connor Pearson is a senior and communications major at William Woods University, with emphases in public relations and leadership, and an ASL minor. He is from Edmond, Okla. View all posts by Connor Pearson