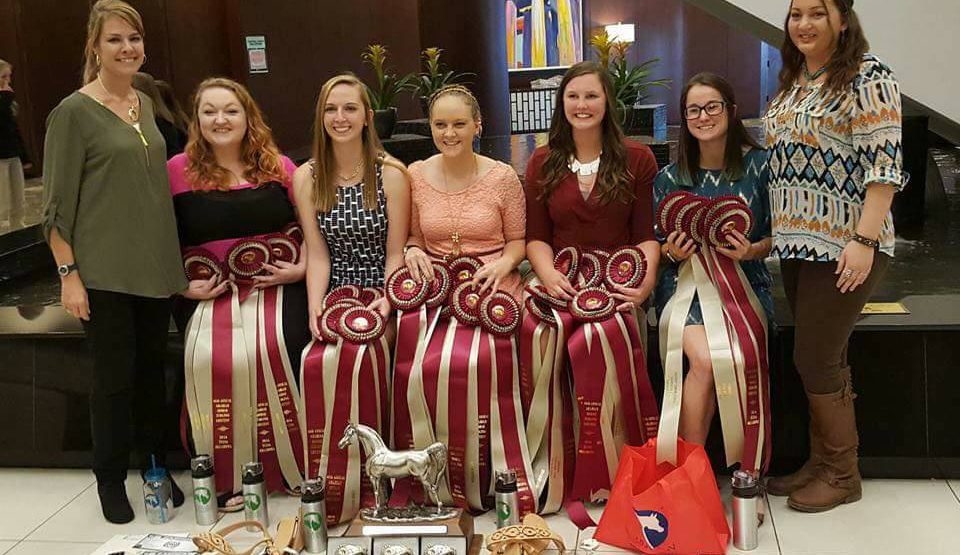 “We were holding hands, holding back tears as we didn’t hear our name called…again, again, again, and again. Finally, when they announced us as the first place team, we felt nothing but joy and excitement.”

That sentiment was expressed by Anna Johnson, a junior and equestrian science major at William Woods University, and one of the five members of the university’s team that won the 2016 Arabian and Half Arabian National Championship Judging Contest on October 27–29 in Tulsa, Oklahoma.

William Woods first attended the competition in 2006, when it won the national title. In 2015, the program secured a second championship. This year, the team repeated the success, winning the 2016 National Championship and a back-to-back victory.

“This is the first time we’ve had all five team members end up in the top ten overall as individuals,” says Jennie Petterson, associate professor and chair of the equestrian studies department. “That tells you how strong their performance really was. The team won the performance division by such a large margin that no other team could close the gap.”

There were about 200 contestants from 4-H and FFA clubs, AHA clubs, and universities competing in the judging contest. William Woods was in the collegiate/senior division, beating out schools like Michigan State University, Colorado State University, and the University of Nebraska–Lincoln.

Horse judging is a specific discipline within the equestrian field, largely aimed at youth and young adults. It develops skills such as decision-making, logic, and public speaking. Competitors place animals in classes based on confirmation and performance, then orally defend those placements to a team of judges.

“We are generally a smaller division of the equine program that often gets overlooked, but horse judging has so many unique things to offer equestrian students, as we’re preparing for entering or growing in the equine industry,” shares Johnson.

Training for the 2016 competition was especially challenging for the William Woods team. Students who are members of a winning team cannot compete at the contest again, meaning that the five national champions from last year were ineligible and coaches Petterson and Liz Haben (an assistant professor of equestrian studies) had to work through losing eligibility for half of their team.

“Competition at this level takes a tremendous commitment of time and energy from the students and the coaches,” says Petterson. The team began preparation at the beginning of the semester, practicing two nights a week and on weekends. They had to learn class specifications for approximately 15 performance events and halter.

The competition places the top five teams and top ten individuals in each of the three areas. The William Woods team came in first in the performance division, fourth in halter, and third in reasons.

Gayle Lampe, national and international leader in equestrian science and William Woods professor emeritus, was serving as a member of the judges panel for the show and learned of the contest result as the team participated in the traditional “parade of teams” on Saturday afternoon, following the awards breakfast. It was all smiles and clapping between Ms. Lampe, the rest of the judges panel and center ring officials, and the students, as William Woods was recognized as the National Champion Senior Team for 2016.