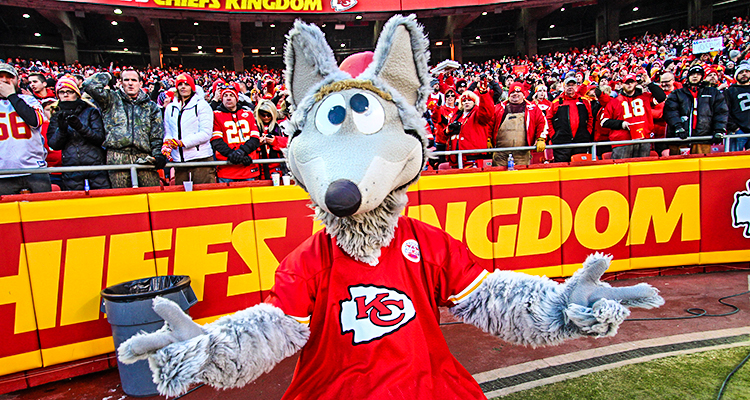 Dan Meers, otherwise known as KC Wolf, has lived a fascinating and fun-filled life as the mascot for the Kansas City Chiefs. But three years ago, while practicing an aerial stunt at Arrowhead Stadium, he almost lost his life.

Meers survived the accident and will be at William Woods University to speak Nov. 14. Offering both humor and wisdom, KC Wolf will take his audience behind the scenes of the NFL and share the core values that guide his life. His talk will be at 4 p.m. in Dulany Auditorium. It is free and open to the public.

After the accident, Meers wrote an inspirational book about his life and that near-death moment, “Wolves Can’t Fly: KC Wolf on Faith, Family and Fur,” which displays the perseverance, enthusiasm and humility he is known for.

Travis Tamerius, director of the Office of Faith and Service at William Woods, met Meers when they were both students at the University of Missouri. After several recommendations from others, he decided to contact the Chiefs mascot and invite him to share his story with WWU students and the Fulton community.

“It’s never been more important for young people to hear stories of inspiration and resilience in the face of life’s challenges,” Tamerius said.  “Dan’s story is one of those and we’re glad to welcome him to campus.”

Meers, 49, has been the mascot of the Kansas City Chiefs for more than 25 years. Since his introduction to Chiefs fans, KC Wolf has quickly become one of the most entertaining mascots in professional sports and in 2006 he was inducted into the Mascot Hall of Fame.

During college at Mizzou, Meers was a college national champion mascot as “Truman the Tiger.” After college, the St. Charles native got his first job as “Fredbird” for the St. Louis Cardinals and shortly afterward joined the Chiefs as KC Wolf.

After being seriously injured in 2013, his career as a mascot could have been over.

“Spent nine days in a hospital and six months hanging out at a physical terrorist, physical therapist, I should say,” Meers said after the accident.

Meers says it takes a lot of endurance to be able to make it through an entire game. His conditioning consists of riding a stationary bike 23 miles every day. His costume weighs about 35 pounds, but by the fourth quarter, Meers says it feels like he has a piano strapped on his back.

Being KC Wolf is more than just a fun job for Meers.

“My goal is always to be a character with character. I not only want to be a good mascot, but more importantly, I want to use it as a platform to be a positive impact in this world we live in,” he said.

Meers lives in Kansas City, Missouri, with his wife Cam and their three children, Mycah, Aaron and Mallory, but he travels throughout the United States and the world entertaining thousands of people both in and out of costume. He is in high demand not only as a mascot but also as a humorous and motivational speaker to audiences of all ages. His enthusiasm, optimism and love for life are contagious and make him an inspiration to all those he meets.