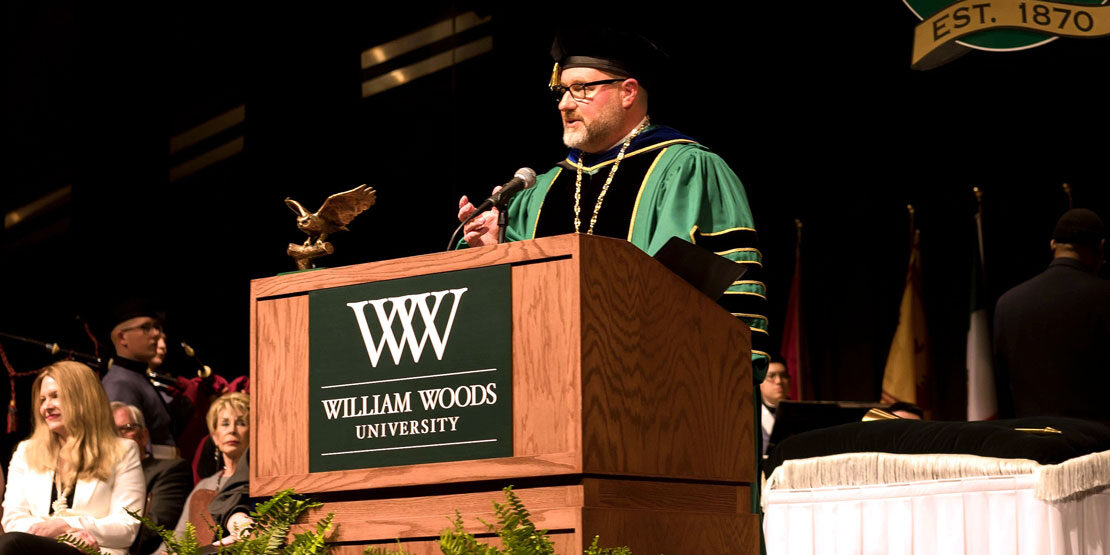 For just the 13th time in school history, William Woods University (WWU) inaugurated a new President today, as Dr. Jeremy Moreland was officially installed in a ceremony that included the William Woods community, the WWU Board of Trustees, University alumni and supporters, and state and local leaders. The ceremony was the first William Woods presidential inauguration in 32 years.

“I join you today both humbled and in awe of the magnitude and privilege of the responsibility before me,” said President Moreland, officially appointed WWU President on September 21, 2021, in his inaugural address today. “It is with immense gratitude and honor that I accept the charge given to me as the 13th President of William Woods University.”

The ceremony, held at Cutlip Auditorium on the WWU campus, featured the official installation of the president to the office by the William Woods Board of Trustees. Board Chair Romaine Seguin presented President Moreland with the official inauguration medallion, symbolic of the authority and responsibility of the Chief Executive Officer of the University.

“Today, President Moreland brings to William Woods a leadership vision that will move our institution into the future,” said Seguin. “He has tireless energy and enthusiasm for the tasks before him, is innovative, and has the courage and capability to lead William Woods to new heights.”

President Moreland joined William Woods from St. Thomas University, a private, regionally-accredited university of 5,500 students in Miami, Florida, where he was serving as provost and chief academic officer. Dr. Moreland’s past positions also included serving as provost and chief academic officer at the University of the Rockies (Denver, Colorado) and academic dean and executive director, associate dean and doctoral research faculty of the School of Advanced Studies at the University of Phoenix (Arizona).

A native of Oklahoma who was raised in Texas, Dr. Moreland earned doctorate (1998) and master’s (1996) degrees in General Experimental Psychology from Texas Christian University. He is a 1993 graduate of Stephen F. Austin University in Nacogdoches, Texas, where he received his bachelor’s degree in Psychology with a minor in Hearing Impaired Studies/Sign Language.

He is married to Diane Moreland, who serves as Research Analyst with the Southwest Interdisciplinary Research Center, which is part of the School of Social Work at Arizona State University. Dr. and Mrs. Moreland have two daughters, Maddy and Olivia.

“The inauguration of a new president is a significant event in the history of a university,” said Dr. Moreland. “As we leave here today, and consider the complexity and interlaced nature of the challenges and triumphs we will face together – as citizens of this country and world – our commitment to preparing learners for success through a quality higher education must blaze the trail of our work together.”

Today’s inauguration ceremony is the centerpiece of a week of events at William Woods, with an all-campus celebration taking place immediately following the ceremony today at the Sam B. Cook Amphitheatre. Alumni Weekend will kick off tomorrow  (Friday, April 8), featuring a WWU 150th Birthday Celebration at Tucker Dining Hall and a “Unveil The Trail” ribbon-cutting event for the first phase of the construction of the new Junior Lake walking trail on campus. Alumni Weekend will also be honoring anniversary classes which missed their on-campus celebrations in 2020 and 2021 due to the pandemic.