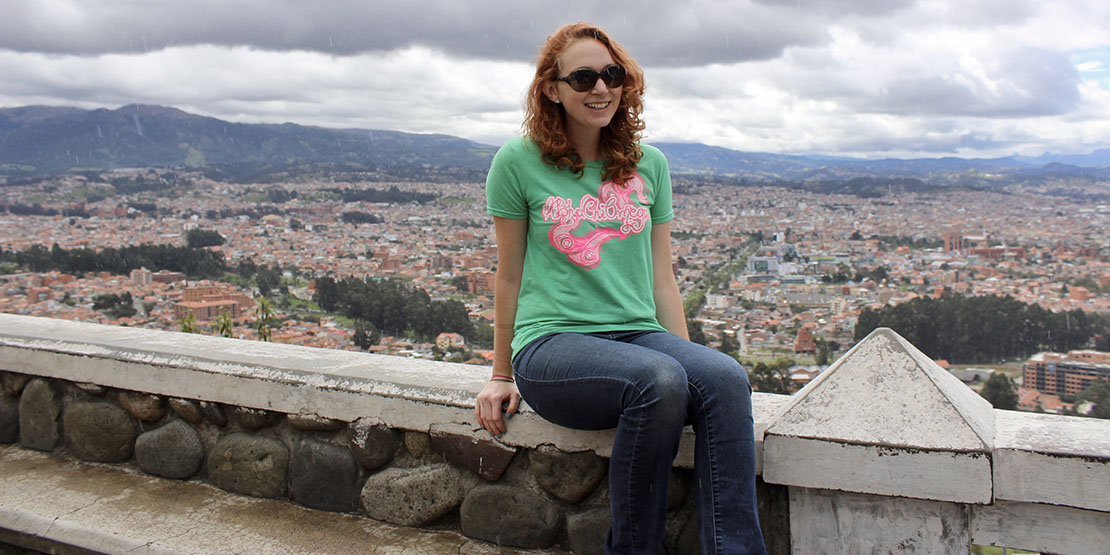 I grew up in Tucson, Arizona where I currently live. I was involved in 4-H and rode horses from a young age. The Equestrian Science program is what originally brought me to William Woods, but I decided to pursue a degree in Biology while I was there. I have always loved animals and science, and when I realized I did not want to go into Equestrian Science as a career, Biology became a likely alternative. With Biology, I realized I could still have a career working with animals, and that there were a lot of career options available.

I became a member of Alpha Chi Omega while I was at William Woods. Being in Alpha Chi was great because while I mostly stayed focused on academics, the sorority allowed me to get involved in events on campus and my sisters became my family in Missouri. Being a member of the sorority taught me many valuable life skills, and the values and symphony are still so important to me today. I’m so glad that I joined a sorority.

I just got married last month and a few of my sorority sisters from William Woods were at my wedding. I have also been able to attend Alumni Weekend a couple of times, and have enjoyed reuniting with my sisters and other friends from William Woods there. It can be hard to see each other very often because I live so far away from Missouri, but we still keep in touch and are working on planning a trip together in the future.

The main course that guided my decision to go into a career in wildlife conservation was an Ecology course I took during my junior year at William Woods taught by Robin Hirsch-Jacobson. After recognizing my enthusiasm for ecology, Robin encouraged me to look into doing summer fieldwork. The following summer, I participated as a volunteer with a conservation program at the Grand Canyon radio tracking California condors. The experience and the animals were both incredible, and it solidified for me that it was the kind of work I really wanted to pursue.

Conservation is a huge and diverse field, and many types of careers are possible. Since graduating from William Woods, I have been involved in different seasonal wildlife research projects in Arizona, and had the opportunity to volunteer on several projects in South America. I’ve worked with many different species, including black-tailed prairie dogs in southeastern Arizona, Andean condors in Ecuador, flat-tailed horned lizards in Arizona and California, and slow-worms, a type of legless lizard, in the United Kingdom. Learning about species is extremely important to conservation, especially in a rapidly changing world where there are many threats to species.

My favorite species I have worked with is the flat-tailed horned lizard. Although they are not endangered, they are considered a threatened species, and have the smallest range of any horned lizard in North America. I have spent several summers in Yuma, Arizona collecting data on these lizards. A typical day in the field usually begins around 4:30 in the morning, before sunrise. Temperatures in Yuma are extremely hot in the summer, so we do most of our data collection in the morning and late afternoon. It can be challenging to work in such an extreme environment, but overall, it is rewarding. The lizards are charismatic, and it’s so interesting to work with them. We’re always learning something new about them from our research.

My career is really just beginning, but it has already taken me to many different places which have greatly enriched my life. I truly enjoy working in this field.

The future and some advice for students

It is time for fieldwork to begin again, and I am preparing to start another season working with horned lizards in Yuma. However, by the end of the year I will hopefully be moving to the United Kingdom to join my husband, who is British. There are fewer seasonal research opportunities in the UK, but I am hoping to find a position working as an Ecological Consultant, performing surveys for protected species primarily in areas where development is taking place. It will definitely be something new for me, and I am looking forward to discovering what the future has in store.

I had a great experience as a student at William Woods. In my case, my William Woods education really helped me hone in on what career I wanted to pursue. My decision to go to William Woods started me on the journey I am on today, and helped me grow as an individual.

My best advice is to explore anything you are interested in and take a variety of classes. Even if you think you know what you want to do, you might surprise yourself and further develop an interest that you would not have expected.

William Woods University47 minutes ago
For the third time in just the past two months, the University has received a generous donation, with this one to endow a new academic scholarship.

William Woods University2 days ago
Back by popular demand! Join us for the 2nd Annual Equestrian Alumni Reunion – ALL ONLINE this time! Once again, Laura Ward has designed an amazing t-shirt for this unique experience. Registration is $40 and that includes the t- shirt and some other goodies, cost of shipping materials and postage. Stay tuned for more info about how to register.

William Woods University6 days ago
We are inviting you to spend your day off at The Woods! This personalized visit experience will give you the option to
•Tour campus
•Meet with a professor
•Learn more about the admissions process
•Review your scholarship options and much more
https://www.williamwoods.edu/